BIJOU is on again, June 2019, after a little break! On June 15th and 16th BIJOU will appear at Le Tres Bon French Restaurant in Malbon Street BUNGENDORE NSW. On Saturday June 15th, dinner and show, starting at 6.30pm, on Sunday June 16th, lunch and show starting at 12. Each event will cost $95 for a great French meal and a great show!

If you haven’t yet seen this show, get along to Bungendore!!! Lovely atmosphere, great food as well…..and catch up with La Mome BIJOU and her racy story.

Chrissie Shaw as BIJOU, and the wonderful Alan Hicks as Alain the Bar Pianist (and sometime poet) bring a past era to life, with music and song from La Belle Epoque through to the 1930s. 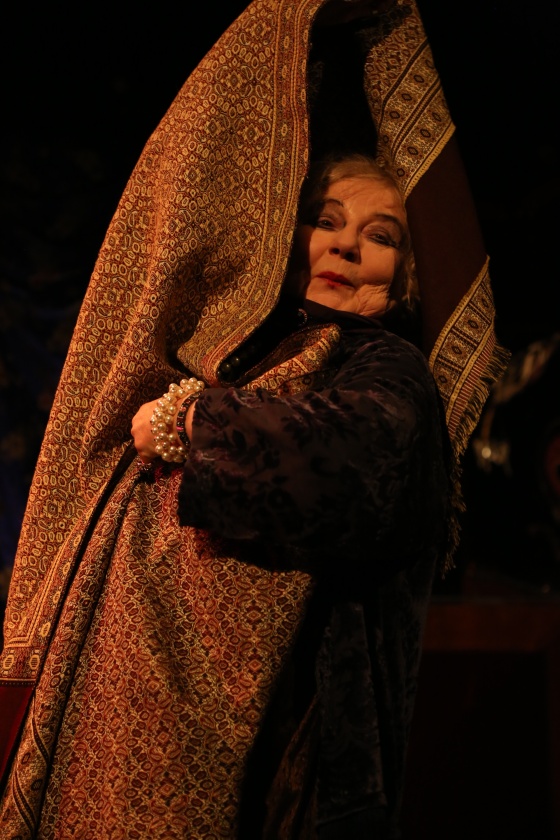 Bijou shows off her loot from her travels to the Mysterious East. All to equip her new enterprise, A high-class House of Joy.

In 2016 BIJOU had three seasons, two in Melbourne (La Mama Courthouse and The Butterfly Club) and one in Sydney at The Depot Theatre. Reviews of all seasons were positive. See the Reviews Page for quotes.

BIJOU is part of the 2016 Famous Spiegeltent Season in Canberra. On March 8th at 6.30pm you can celebrate International Women’s Day by coming to see BIJOU in that wonderful and colourful venue. Go to http://www.canberratheatrecentre.com.au to book, and yes, help to support a team of local professional theatre/music artists by coming and experiencing their work!

We have two seasons of BIJOU this year, one in Melbourne at La Mama’s Courthouse Theatre in June, and one in Sydney at The Depot Theatre, August 17 to 27. And also some more regional shows: Cooma on July 16, and Orange as well, date to be confirmed!

As Jacques reads his poem, Bijou (aka Rubis) rakes in the ‘sous’ as they busk outside Le Chat Noir

Tours all done, Pozible supporters have nearly all got their rewards…just a couple of house shows to do! A very big thanks to all who helped us get on the road. The show went well in the towns. A highlight was the last minute show at the Tamworth Services Club. With only a couple of days’ notice we got 17 people, an interactive crowd they were too! At Bowraville and Wauchope the audience came to the show all dressed up, ready for a party. Such fun, and wonderful audiences as well. They even survived the gritty bits in the show!
NOW the really BIG news! We are doing a return season at The Street Theatre, Canberra, in September this year.

Last time we did the show, our premiere season in 2013, the show sold out by the middle of the first week. Now we only have 6 shows, so hope we get the people who missed out to come along! The show is now well run-in and due to some editing, is a new streamlines version. Alan Hicks the wonderful ‘bar pianist’ has a new song which opens Act 2, all about a bar musician who finds love.

So come one and all to see BIJOU take over the Bar de la Rue (Street 2) with her tales of love, loss and determination!

One thought on “BIG BIJOU NEWS”

Bijou A Cabaret of Secrets and Seduction

Bijou A Cabaret of Secrets and Seduction